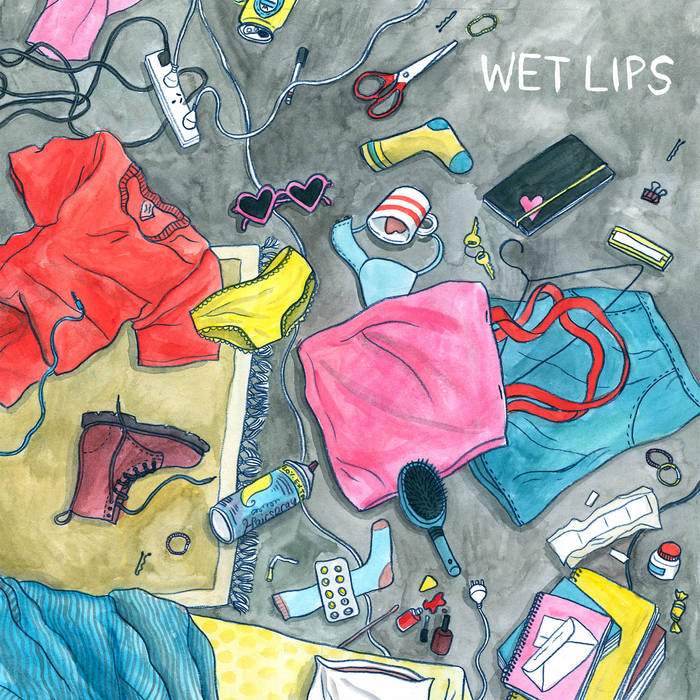 If there’s any hope for music as a force for social change, Wet Lips are at the front of the line. Since forming in 2012, they’ve been pillars of Australia’s surging feminist punk movement, rallying ferocious crowds to their shows (and annual festival, Wetfest) with songs that punch up with devastating accuracy. Led by guitarist Grace Kindellan and bassist Jenny McKechnie and recorded with recently departed drummer Mohini Hillyer of HABITS, Wet Lips' self-titled debut is a mix of pub-rock guts and punk-rock sneer that charts the particular feeling of living in marginalised bodies, charging those bodies with the energy to kick back.

Wet Lips switches off between savage critiques and furious, howling anthems. Where lead single ‘Can’t Take It Any More’ is a brutal dismantling of middle class posers trying to wring credibility out of a pair of ripped jeans, ‘Period’ is a vivid hurricane of menstrual imagery. Where ‘Hysteria’ is guttural, bitter and sarcastic, its chorus wailed until it loses all shape, ‘When I See You’ bubbles with caution, nerves, and anticipation. What binds them is their musical signature. Wet Lips rips from start to finish: the distorted crunch of Kindellan’s riffs circle McKechnie’s racing bass lines, anchored on one side by the pummeling energy of Hillyer’s drums, soaring on the other with the tag-team vocals of the band’s leads.

Wet Lips is a record of three people growing from thrashing out garage songs for the sake of it to becoming an archetype of contemporary punk. It’s also a record of the band’s first life: with Girl Crazy’s Georgia Maggie taking over on the drums, Wet Lips is as much a commemoration of Hillyer’s five years with the band as a promise of what comes next. That’s more ferocious shows, more biting critique, more songs that imagine rock as a means of finding power in a powerless society. Wet Lips arrives bursting with personality and wit - an antidote to the putrid state of the world.

Huge thanks to Amanda Vitartas at Future Popes for helping us bring this album into the world.

Bandcamp Daily  your guide to the world of Bandcamp

Cannibal Corpse's George "Corpsegrinder" Fisher stops by for an interview